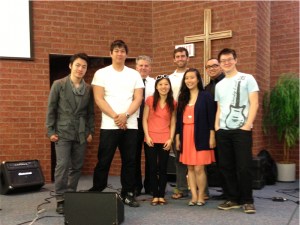 The Band with Captain Mark Hall of the Salvation Army (3rd from left).

Picture seven young adults rocking out on stage before a small crowd of about thirty or so older folks, many with grey or white hair.  The phenomenon was a sight to behold, but perhaps the most beautiful part was that the young and old could sing hymns together in praise to God.  Afterward, we mixed and mingled over ice cream sundaes, and shared our lives with one another.  Many were delighted that we were so joyful to sing the hymns, the meaningful spiritual songs from their own upbringing and faith walk.  One mother was eager to buy a CD in hopes of enlightening her rebellious teenage kids with the gospel message in their musical tastes.

For the band, it was our first chance to lead worship music in an unfamiliar space and fellowship with one another beyond rehearsal.  In the process, we discovered some hidden gems in St. Thomas (town of 36 thousand), which included memorable moments playing Frisbee on the beach under a beautiful starry night after the concert, and delicious dessert nachos (who knew there was such thing?!!) at GT’s Beach Bar & Grill.

Heidi and myself had the pleasure of staying with Al and Marilyn, who were tremendously hospitable in taking us in, providing us breakfast in the morning, and simply sharing their lives with us.

Special thanks and blessings to our friend and brother, Captain Mark Hall, who graciously organized the praise event and took a leap of faith in allowing us to lead his congregation in worship both Saturday evening and Sunday morning.

The weekend in St. Thomas was by no means “perfect.”  In fact, several things had gone “wrong” leading up to the praise event, in spite of my best efforts.  As we were short a singer, I ended up singing while playing piano.  I had neglected to take a careful inventory of required equipment, and at some point, it became apparent that: 1) the keyboard needed cables that neither the church nor myself owned, and 2) we needed three stage monitors but the church only had two.  Right before rehearsal, Justin drove out to rent the missing gear from Long & McQuade, which took an hour there and back.  In the end, the wrong keyboard cables were rented, so I played the whole set on the acoustic grand piano (which was glorious, by the way!).  Technical difficulties prevented us from getting the third stage monitor to work, so that was also rendered useless.  Despite it all, we had a great time praising God with whatever we had.  Given the opportunity, I would be eager and joyful to do it all over again.

In my quiet time when I reflect on this trip, it is Verse 3 and 4 of “May the Mind of Christ” that sing out to me most:

May the love of Jesus fill me
As the waters fill the sea
Him exalting, self-abasing
This is victory

Last weekend I was humbly reminded of how undeserving I am of His grace, and how important it is for me to renew myself in His Word daily.  Whatever unexpected trials may come your way, I pray that His peace and love would overflow in you, that you might persevere in all things and bring glory to Him.