Hi Everyone! Justin and myself (Joannie) from the Hymn Remix Project will be doing a workshop featuring a paired down set of Hymn Remix arrangements on Wed. July 19, 3pm, as one of the sectionals in the conference. Our hope and prayer is to encourage and inspire other worship leaders in modern church settings, and introduce our arrangements to them for use in their own worship services.

The Hymn Society (of the United States and Canada) was founded in 1922, and organizes annual conferences with workshops, plenaries, and hymn festivals as connection points to encourage, promote, and enliven congregational singing. This is a wonderful opportunity to dialogue and network with other worship leaders and church music ministers to share songs, hymns and new worship resource materials.

The Hymn Remix Project is super excited to be part of this conference opportunity in Waterloo this year, and invite you to join us as we encourage, promote and enliven congregational singing with modern hymn arrangements. 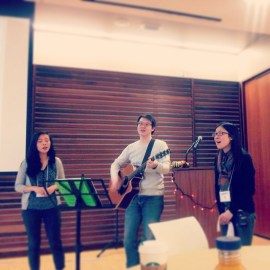 A quick heads up for Pastors and ministry leaders in the Greater Toronto Area: The Centre for Mentorship & Theological Reflection is holding their 16th annual conference this coming Saturday at Bayview Glen Church.  A few of us will be there as part of the worship team, and we will have CDs available for sale.  If you attend, please come by our booth and say hello!

Before I became Christian, I didn’t think much about copyright.  It seemed pretty straightforward to me: if you created something, shouldn’t you be entitled to exclusive rights over it, whether it’s a logo, an invention, or a song?  If what you created was used by others commercially, shouldn’t you be entitled to a share of the profits?  Entering the world of contemporary Christian music, however, I was thrown for a loop.  With worship teams technically operating as nonprofit cover bands in churches worldwide, how did Christian artists manage copyright of their creative works?  Were they interpreting Acts 4:32 literally and allowing free use of their music, or were churches paying massive royalties every week?  More importantly, should copyright law even apply to music whose main purpose is to glorify God?

For the law of Moses says, “You must not muzzle an ox to keep it from eating as it treads out the grain.” Was God thinking only about oxen when he said this? Wasn’t he actually speaking to us? Yes, it was written for us, so that the one who plows and the one who threshes the grain might both expect a share of the harvest. —1 Cor. 9:9-10

If the Christian artist is “the one who plows” and the church is “the one who threshes,” then CCLI (Christian Copyright Licensing International) is the organization that supports both, ensuring fair sharing of the harvest.  For churches, CCLI provides unlimited access to SongSelect, a massive database of worship music complete with powerful search tools, streaming audio, and accurate sheet music that can be transposed, downloaded, and printed for licensed use in worship services—all for a single annual fee, which varies depending on the size of each church.  This fee enables CCLI to provide artists with free church copyright administration, and even pay royalties to artists whose songs are most frequently used.

For us, an unsigned band without the resources of a record label, CCLI not only provides the means to manage legal use of our music, but it also enables us to reach a vast network of churches through the SongSelect database.  If five or more churches report copy usage for our songs, CCLI will add the corresponding chord charts and lead sheets to SongSelect.  We’re very grateful when people buy our music, and we’re humbled when people enjoy it, but ultimately what we want is for people to use our music.  So if you’re a worship leader or music director planning to use our music for worship service, please help us out by reporting your usage!